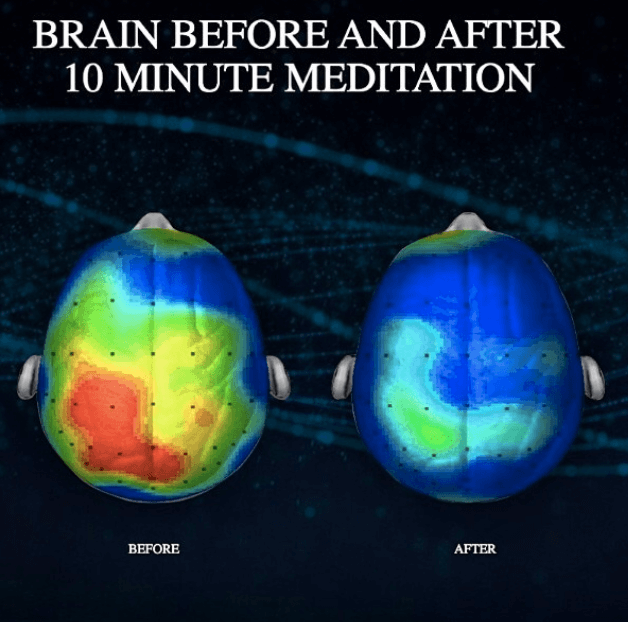 When you step out of a yoga class, no doubt you feel better from head to toe. Your muscles feel more relaxed, you may feel stronger, & then there’s the mental clarity only om-ing can bring (Yes, I Om in my own practice). But what’s really going on in your brain when you pop in & out of downward-facing dog?

“We know that accumulating evidence shows yoga is good for your body, health & mind. Yoga has been used in the treatment of anxiety conditions, depression, insomnia, eating disorders, & others,” says Jonathan Greenberg, PhD, a postdoctoral research fellow in the department of psychiatry at Massachusetts General Hospital and Harvard Medical School.

Even when applied to large populations, like those in prison, it increases inmates’ sense of wellbeing & self-control.

With all of those great benefits, you want to know exactly how a simple sun salutation changes your brain. While research is still building, one potential reason is yoga’s big impact on dialing down chronic stress. “We know stress is a very fertile ground for many physical & mental ailments,” Greenberg says, also pointing out that evidence shows yoga, in general, can help improve mood & emotional regulation. Both of which are associated with reductions in the stress hormone cortisol. Even better: yogis experience this feeling this even after a single class.

Take one recent study in the journal Frontiers in Immunology, which found that mind-body exercises like yoga actually decrease the cascade of inflammation that so often sits simmering in the body & wreaking havoc due to chronic stress.

You also may capture that zen vibe because yoga is working on an even higher plane to drive down the stresses of the day, put them in perspective & help you cope better in the future when not-so-great things come your way.

The deep breathing & meditation works on what’s called the HPA axis (or hypothalamic-pituitary-adrenal axis), which controls your sympathetic nervous system (the fight or flight response that keeps your body cued up) as well as the parasympathetic nervous system (this tells you to chill out). Yoga may reduce the SNS & increase the PNS, resulting in a reduction in heart rate & blood pressure.

Your brain takes cues from your body (& vice versa, of course), so when your body is calming down, your brain gets the message that all is well.

But you don’t want an activated PNS all the time.
You’d be a chill zombie.

You want to be more like a calm & collected person who’s on the ball. That involves a balance between your SNS & PNS, says Amy Wheeler, PhD, who serves on the board of directors for the International Association of Yoga Therapists & is a professor at California State University in San Bernardino.

“What yoga can teach you is to use your SNS when you need it for clarity, alertness & focus without going into the fight or flight response,” she says. “The ultimate goal of yoga is to be calm & alert.”

In addition to keeping your body young, yoga turns back the years on your brain, too. In one 2017 study, older adults (over age 55) with mild cognitive impairment spent 12 weeks either practicing kundalini yoga or memory training. While both groups’ memory improved, the yoga group saw a boost in executive functioning & emotional resilience, possibly due to the chanting in this yoga that strengthens verbal & visual skills, the researchers report.

Finally, there’s the fact that yogis tend to have a cooler reaction to problem events — & you’re left wondering how they do it.

Those who meditate have a larger right insula (the portion of the brain that involves body awareness). That’s a good thing.

“It’s important when you encounter a stressful situation. Knowing your reaction to stress can help you identify the emotion, nip it in the bud & prevent it from escalating,” Greenberg says.

Your amygdala — the reptilian part of your brain that reacts to fear —may also decrease in reactivity in response to stress.

How’s that for a zen attitude?

There isn’t an agreement among researchers that there’s an ideal amount to practice yoga. However, research that Greenberg is a part of suggests you require 40 minutes a day for significant stress reduction.

Of course, a single session can buffer your stress response, but there’s the question about how long that lasts for, & that’s not clear yet.

Wheeler suggests yoga twice a week. “I’ve been teaching students yoga for 21 years. Every quarter, I see that in just 10 weeks, there’s a noticeable decline in anxiety & stress,” she says. Three times per week is better, but start with the goal of two.

“We can talk about anxiety, depression & blood pressure lowering in yoga, all of those are proven. But the biggest thing we see that results from yoga is that your quality of life will change for the better,” she says.

Take on their research & advice.
Go spend some time on your mat!

Why you should do Food Sensitivity Test?

Ever used a Pendulum?

This site uses functional cookies and external scripts to improve your experience.

NOTE: These settings will only apply to the browser and device you are currently using.